The effects of self-management program among uncontrolled hypertensive patients

This research was a quasi-experimental research, which aimed to study the effects of             self-management programs among uncontrolled hypertensive patients. The program was developed by the researcher based on the self-management concept of Kanfer & Gaelick-Buys. The sample was uncontrolled hypertensive patients, who had received the health services from two Health Promotion Hospitals, Bang Pa-in district Phra Nakhon Si Ayutthaya province. 40 persons were selected sample groups by a specific method, which were equally divided into the experimental group and the comparison group of 20 subjects. Each subject to a self-management program and the routine nursing care. While the comparison group received only the routine nursing care for an eight week period. The research instruments were the health behaviors questionnaires and the self-management program which were developed by the researcher and approved by three experts. The Cronbach Alpha coefficient was 0.80. Data was analyzed by descriptive statistics and t-test. The results of the study showed that after receiving the self-management program the experimental group had higher mean on health behavior score (Mean=2.52, SD=.173) than before receiving the program (Mean=2.15, SD=.366) and more than the comparison group (Mean=2.04, SD=.219) at statistically significant <.001 (p-value < .000). Mean of diastolic blood pressure level and mean of systolic blood pressure level after experiment were lower than before experiment and had lower than the comparison group at statistically significance < .001(p-value < .000) 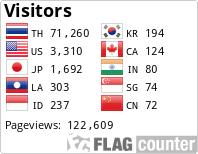